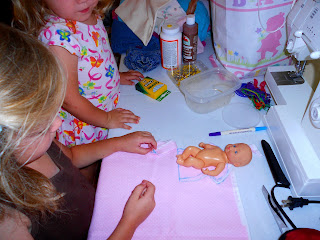 Immy was given this doll from a friend who no longer wanted it, but the little thing was in need of some clothes, so we set to work making her a dress. Immy picked out the fabric from my stash, and we cut out a very simple pattern by tracing around the doll. It took  few tries, and after a bit I realized this was becoming my project instead of hers. It was a little more involved than I thought it would be, and since I was figuring it out along the way there really wasn't much Immy could help with. The dress came together pretty quick, and after about an hour it was all done but the hand sewing.
I finished up the hand sewing while waiting for the kids at gymnastics. 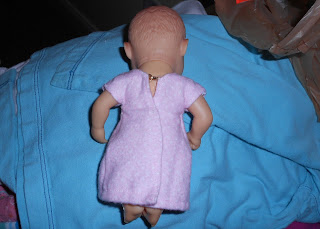 The bottom of the dress has velcro, but the top of the dress would not meet up (I'm definitely a beginner at the whole pattern drafting thing!), so we used a pretty clasp instead. Kind of a happy accident! 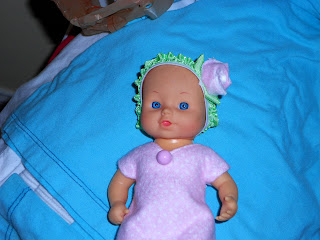 That night after Immy went to bed I took the doll back to reenforce some of the seams on the dress sleeves, and the doll seemed to need a little something extra, so I made a head band out of elastic, green ribbon, and left over scraps from the dress. Immy was very excited when she woke up the next morning, and now insists that the doll needs a pair of socks. I think I will let her work on that. ;) 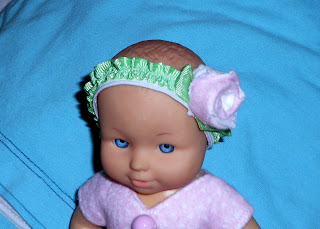