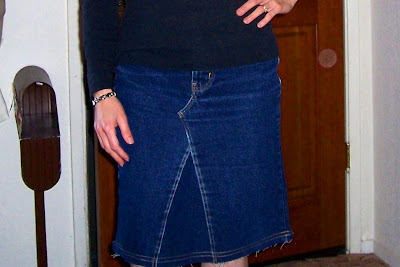 Here are the pictures of the "new" skirt I made at the sewing workshop on Saturday. The workshop was called Going Green. (I love to re-purpose, so it's great to see that it's actually in-style now! :)
I thought I only had some jeans from DH, so I was going to make a bag (I just didn't think he would use a skirt), but at the last minute I found a new pair of jeans a friend had given me. I had put the jeans in the give-away box because they were uncomfortable to sit in (if you know what I mean), but they fit me perfect in the waist, so I nearly squealed with excitement when I found them! I knew they would make the perfect skirt! I have never sewn clothing for myself before, so this was kind of a treat. 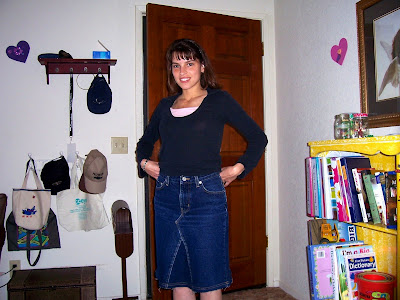 The waist is kind of high, but I don't tuck my shirts in, so it doesn't really show. It's kind of nice too because I don't have to worry about it slipping down when I'm running after the kids :) 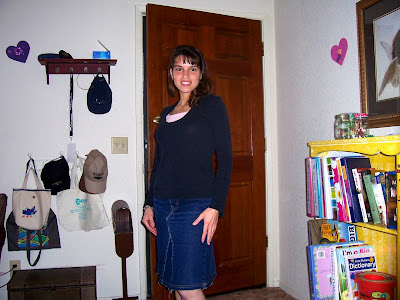 It just looks darling (if I do say so myself), and was a lot easier than I thought it would be! It took about three and a half hours from start to finish, and I was going really slow on the sewing part. 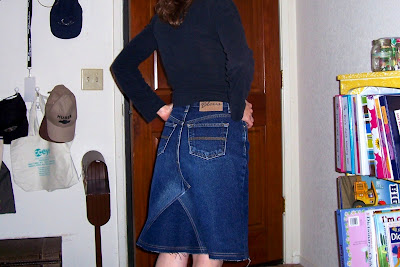 The end is not hemmed, so after a few washings it should fray nicely and look pretty cool. I think DH liked it more than a bag ;)
Posted by Banana at 10:44 PM