It's a boy!!
I'm a little late with the announcement since our sonogram was a few weeks ago. It's been a little busy around here, but here are the pictures of our little one, finally! 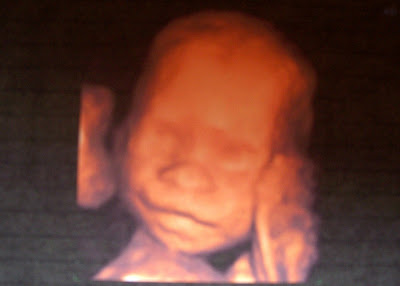 This is a picture of his face from the 3D ultrasound. His arms are up next to his head.
I got a few questions about the details, so let me explain it a bit. This is a computer generated image, that means the image is produced by the computer from the information gathered when the ultrasound waves bounce off of the baby and return to the machine (as I understand it). It is not a photograph. The images look like they have been sculpted out of clay because the computer does not pick up all the little details of the face. The baby does have eyes, is about 1lb, and the features are large because the baby has no fat and does not start getting all it's chubby cuteness until the last few weeks before D-day. In case you were curious. 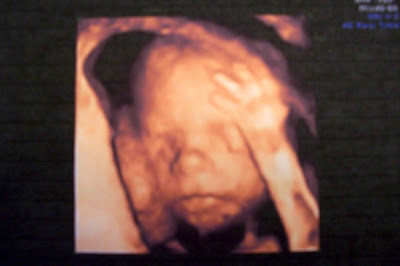 Here is another picture of his face with his little hand on his head. 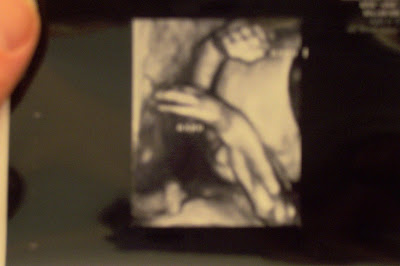 This picture is 3D in black and white, and it shows the little hands up on his head. This is how he was for most of the ultrasound, I love seeing all his little fingers! It was absolutely amazing to feel him move and see it on the screen at the same time! The feeling was indescribable to watch him on the screen; it was like seeing an angel and wondering what you did to deserve such a gift.
It was a strange mix of emotions to see him for the first time and know that in a few moments it would be over, and I would have to wait five more months to see him again. It was so bittersweet. I wanted to drink up every moment, and commit to memory the way he moved his hands and how he looked when he stretched. It was amazing.
Posted by Banana at 9:23 PM