We have started a new project for Lent as a way to help the kids remember to do little things for others (and behave for Momma), we call them Sacrifice Beans. The way it works is that any time the kids do something nice for someone else (a sacrifice) I put a bean in their jar. If they do something naughty or mean they have to take a bean out. At the end of the week, on Sunday night, we count the beans and the children get a penny for each one.
The system has worked really well in encouraging the kids to do better at home, and we have also seen a wonderful improvement in Immy's behavior at school! The school starts each child with three stars at the beginning of the day, and the kids lose one each time they misbehave, so Immy gets a bean for every star she doesn't get marked off. For the last two weeks she has kept all her stars! 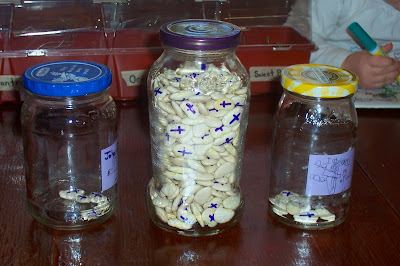 The kids get to keep all their bean from one week to the next, so as long as they gain more than they lose they will get more money each week. This has helped keep them excited about the idea, and since the first week JP had 13 beans and Immy had 17, I'm not really worried about the cost getting too high. 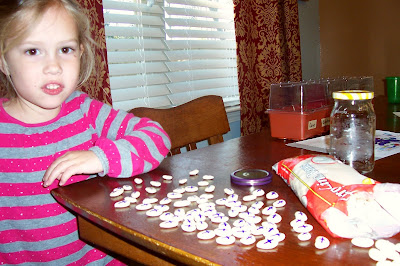 This is not a new idea, and I loosely based our beans on the ones from the book The Year &; Our Children: Catholic Family Celebrations for Every Season

. This book has so many wonderful ideas! The author had children of many different ages, so I usually simplify her ideas to work for my young kids. 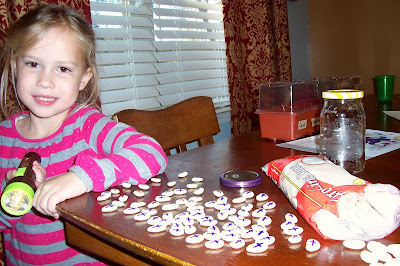 Here's how we made ours, we used: 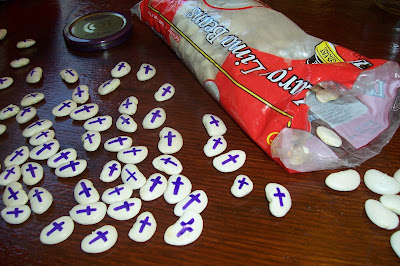 Use a purple Sharpie to draw a cross on each Lima bean. I only did one side of each bean, because they take a few minutes to dry completely, and it is a bit time consuming. (After an hour of drawing little crosses I decided they didn't really need to have crosses on both sides.) When they are dry place them all in the largest jar.  Make sure your glass jars have been cleaned and dried thoroughly, so that you don't end up with your Lima beans sprouting. Next make the labels for the small jars. I let the kids draw little pictures and put their names on a small purple Post-it note, then we taped them to the jars. Done. You could embellish your jars a lot more and they would be really cute, but I had to go serve dinner at this point.
I think a pound of Lima beans was a lot more than we needed, so if you are short on time you could probably just do half a pound. I wanted to do extra, because I am planning to use these next year when all three of the kids will be using them.
Posted by Banana at 11:51 AM