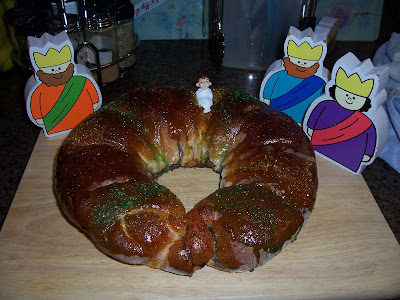 Well, a little bit late. We had a lovely Epiphany/Three Kings day! We made our king cake again this year, so I think I could call it a tradition now, right? Maybe next year.
I love doing something a second time! You know, when the new hasn't quite worn off, but you get to fix a lot of the mistakes you made the first time? I really enjoyed making the cakes this year. Partly because I hadn't done any baking this holiday season, or even much cooking really, and I missed that. It was nice to squeeze in a cake on the last day of Christmas (you know, the twelve days of Christmas end on Jan. 6th). And also because I was smart enough to write a review of the recipe after I made it last year, so I could actually remember what to change this year. It turned out great! 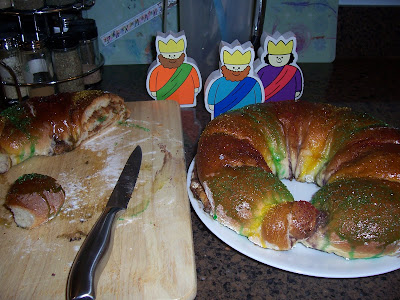 Here is a little bit of the history of the celebration if you are not familiar. Epiphany is the day we celebrate the three wise men finding baby Jesus. It is the final day of the twelve days of Christmas and the closing of the Christmas season that started with advent. Because it is celebrated twelve days after Christmas most people think that Jesus was twelve days old, but tradition actually holds that he was probably one to one-and-a-half years old (Hence king Herod ordering the death of all males under two years old), and that the magi found him in his home in Bethlehem. The cake is baked in the shape of a crown for Jesus' kingship, and decorated with three colors for the three gifts brought by the magi. Yellow for gold, purple for frankincense, and green for myrrh. A small baby or trinket is hidden inside the cake and the person who finds it in their piece gets an honor or task (depending on what country you stole your tradition from). Many countries also have the tradition of putting out children's shoes/stockings the night before to be filled with a treat for Three Kings day. It's a fun tradition to follow, and we have really enjoyed it!
I do hope we can make this happen again next year. I have plans to make it even better by finding a three wise men book to read the kids, making little crowns with them, oh, and switching back to opening our stockings on this day with some of these ideas for the gifts! 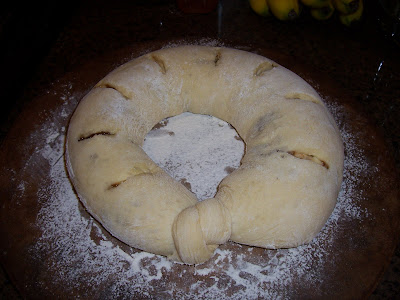 I used this recipe again, and here is my new review for next year: The recipe makes two party sized cakes, so I split the recipe in half which made two perfect family sized cakes. This also worked well since I don't have much counter space to roll out large pieces of dough. I used the bread maker for all the prep work, and made them non-dairy by swapping butter and milk with margarine and almond milk. I also made a sweet potato filling. The filling was so good and creamy, the filling from the recipe is good but it makes the cake taste just like a Cinnamon bun, and I wanted something unique for our once a year treat. I dyed the glaze green, purple, and yellow with food coloring and then put colored sprinkles over that. It was better than last year but still not what I wanted -more tweaking on that next time. I hid a bean in the cakes and put a baby Jesus on top. Lastly, I baked them a bit too long. The cakes I made are thinner than the original recipe, so I think 325-350 is a better temp, or maybe less time in the oven. Overall I was really happy with the cakes/sweetbread, they were so good! Not as good the second day, but that didn't stop any of us from finishing it off! 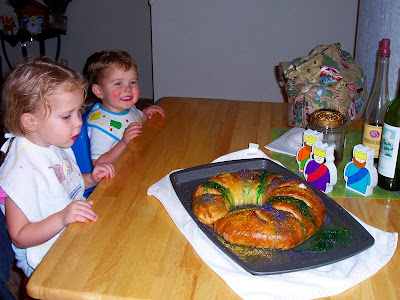 Here is a picture from our first year!
Posted by Banana at 8:43 PM