This year we decided to take part in the old tradition of making Hot Cross Buns for Good Friday; well I decided to, the rest of the family just got shoo-ed out of the kitchen until I was done. They only complained a little though, because the buns were delicious! 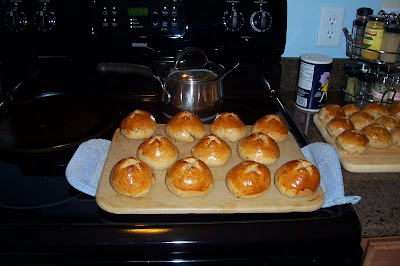 Here they are fresh out of the oven!
I read through all the Hot Cross Bun recipes on Allrecipes.com to get ideas, and then settled on using the Fruit Bread recipe from my breadmaker cookbook. I used the Dough setting instead of the Loaf, and added the dried fruit and spices for traditional HCB. I was not very organized this year so we didn't get a chance to give any out on Good Friday, but we did donate two plates of buns to the MOMS bake sale on Saturday, and made short work of all the rest at home! 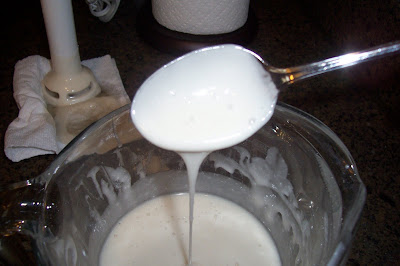 I made a simple Powdered Sugar/Ricemilk/Vanilla Extract glaze to go over the top, but I had the hardest time getting it thick enough! I think I started out with 1/2 cup Ricemilk and had to use close to 2 cups of powdered sugar to get it thick enough for it to show up white on top of the buns, and I nearly burned up my cheap immersion blender getting it mixed. I ended up with a lot more glaze than I actually needed, but the buns looked and tasted great in the end. 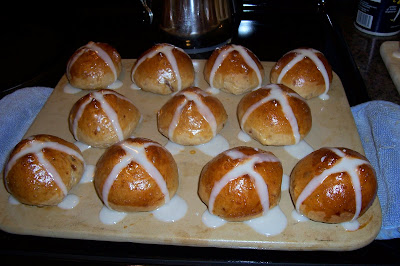 A few things I would like to change next year:
Posted by Banana at 7:25 AM